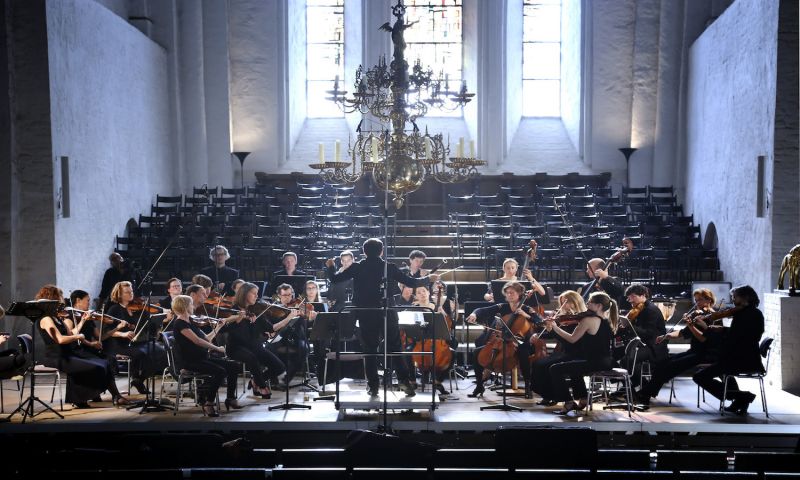 Following the critical acclaim surrounding their interpretation of the Hamburg Symphonies, Ensemble Resonanz and Riccardo Minsai now turn their attention to the Orchestral Symphonies and to what will be the first recording ever of the Wind Sonatas (Wq 184). The new CD appears on the Hamburg-based label Es-Dur on 14th October.

C.P.E. Bach's long period of neglect by the music world prior to the 300th anniversary of his birth in 2014 may well be explained by the same disregard for convention and "bone-chilling intensity" (WDR 3) of his music that make him so appealing now. In his day, however, the "Hamburg" Bach enjoyed superstar status and was actually more famous than his father. Ensemble Resonanz's second recording of his works - the Orchestral Symphonies and Wind Sonatas, on modern instruments - is another testament to the energy and passion of this group of musicians.

The 4 symphonies were C.P.E. Bach's response to a particular challenge: that of writing for a full orchestra composed of both strings and wind in which each instrument had an independent function. The result of this endeavour was no less than the birth of the modern symphony orchestra. A short time earlier, Bach's interest in wind sound had moved him to compose 6 sonatas for wind instruments which are now regarded as having paved the way towards "harmoniemusik" for wind ensembles. No recording of these 6 sonatas exists to date anywhere in the world.

Invitation to the CD release concert on 14 October at 18.30 in the resonanzraum!

The new CD will be presented to the press and friends of Ensemble Resonanz at a release concert on 14th October hosted by the label Es-Dur and featuring Ensemble Resonanz and Riccardo Minasi. Admission is free and we look forward to seeing you!

"What impressed me about Ensemble Resonanz right from the start of our collaboration was the totality with which it embraced any composer we explored. When we played Lully, we were a French court orchestra, when we played Debussy, the perfume of the Belle Époque hung in the air, and when Ensemble Resonanz plays music by Iannis Xenakis or Tristan Murail, it's a truly modern ensemble. This ability to change its colours according to where it sets foot is one of the Ensemble's greatest strengths."  Riccardo Minasi